Enea Capital Group’s operations are focused basically on the territory of Poland. The same macroeconomic factor affecting both the achieved results and the financial situation is the development pace and the general condition of the Polish economy.

According to the preliminary data of the Gdańsk Institute for Market Economics (IBnGR) in 2015 the economic growth pace was 3.6%. It constituted the highest pace of economic growth for four years.

Source: Developments by IBnGR and economic situation forecast No. 89 (January 2016)

Pursuant to the forecast of IBnGR the rate of growth of the gross domestic product in 2016 will amount to 3.6%, which means it will be the same as in the previous year. According to the forecast of IBnGR, the economic situation will be better in H1 2016 - GDP growth will amount to 3.9% in Q1 and 3.6% in Q2. In H2 2016 it may be anticipated that the growth rate will decrease to the level of 3.3% in Q4. Pursuant to the forecast in 2017 the economic situation will still worsen - forecast GDP growth rate is 3.1%. In 2016, the added value in the industry will grow by 5.5%. Worsening of the economic situation in 2017 will be observable particularly in the industry, where the added value will grow by 4.2%. The pace of growth of the domestic demand in 2016 will amount to 3.4%, i.e. the same as in 2015. And in 2017, the domestic demand will grow much slower, i.e. on the forecast level of 2.7%.

The summary of the key macroeconomic ratios characteristic for the Polish economy in 2015-2017 is presented below.

The legal basis for energy market functioning in Poland is the act of 10 April 1997 Energy Law and related secondary legislation (regulations).

At the same time, along with Poland accessing the European Union, the Polish legal regulations relating to the energy market were adjusted to the European laws, including in particular EU Directives regarding the principles of the common electricity market.

The central public administration body nominated pursuant to the Energy Law to realise the duties relating to the fuel and energy management and promote the competition is the President of the Energy Regulatory Office. The objective of the President of the Energy Regulatory Office is regulation of the operations of generators, distributors and companies trading in energy compliant with the Energy Law and Polish energy policy strategies with a concurrent pursue of balancing the interests of particular participants of the energy market.

Enea SA's operations are conducted in the environment subject to specific legal regulations, both in Poland and in the European Union. Legal regulations relating to the energy sector are often derivatives of political decisions, therefore there is a risk of frequent changes within this area which the Company is not able to foresee, and which may, as a consequence, result in a lack of unity and uniformity of regulations, based on which Enea SA performs its operations.

As the European Commission has found that long-term contracts on the sale of power and electricity (LTPPA) constitute prohibited state aid, the Polish parliament adopted an act intended to terminate those contracts. Under the Act on covering stranded costs incurred by power companies due to the early termination of long-term power purchase agreements of 29 June 2007, companies are entitled to receive compensation for stranded costs incurred as a result of the early termination of LTPPAs.

Enea Wytwarzanie has been entitled to receive the compensation by title of LTPPAs since 1 April 2008. 2014 was the last year of Enea Wytwarzanie’s remaining in the aid programme. On 25 August 2015, the President of ERO delivered the decision relating to the so called final adjustment summing up the whole aid programme. The President of ERO determined the amount of the final adjustment of stranded costs for Enea Wytwarzanie in the amount of PLN (+)315.5 mln. Detailed information on this decision was published in the current report No. 32/2015 of 27 August 2015.

On 30 December 2015 the funds in the amount resulting from the decision on the final adjustment of stranded costs were credited to the Company’s account.

Energy groups operate on the Polish energy market based on granted licences. The table below presents the licences held by Enea CG Companies:

In H1 2015, the President of the Republic of Poland signed an act on renewable energy sources. The goal of the act is increasing the energy security and environment protection, e.g. as a result of an efficient use of renewable energy sources. The act provides for, e.g., achievement of at least 15% share of energy from renewable sources in the final gross consumption of energy in 2020. Enea SA will be the so called obliged vendor, i.e. an entity obliged to purchase electricity generated in RES installations connected to the network of Enea Operator sp. z o.o.

On 29 December 2015 the Sejm adopted, after consideration of the Senate's amendments, the content of the act amending the act on renewable energy sources and the Energy Law (J. L. of 2015 No. 2365).

The goal of the amendment which came into force on 31 December 2015 is adjournment by 6 months of entry into force of the provisions of chapter 4 of the Act of 20 February 2015 on renewable energy sources (J. L. of 2015, item 478; further on as: RES act), and in particular the issues relating to the lunching of the auction system for the purchase of electricity from renewable energy sources installations and mechanism supporting the generation of electricity in microinstallations of the total installed electrical capacity not greater than 10 kW. Changes were proposed to be made to the provisions of the RES act, enabling the application of the existing provisions until 30 June 2016, and new regulations - from 1 July 2016.

Since 7 October 2015 there has been a duty to report basic transactions and data (for standard contracts for electricity and gas supplies) to the European Agency for the Cooperation of Energy Regulators (Agency or ACER). Pursuant to the REMIT regulation, i.e. the regulation of the European Parliament and the Council (EU) No. 1227/2011 dated 25 October 2011 on wholesale energy market integrity and transparency (REMIT), until the above mentioned date the participants of the wholesale energy and natural gas market mentioned in Article 9 item 1 of REMIT are obliged to register with the national regulatory authority.

The Regulation of 11 September 2015 on amendment of the Energy Law and some other acts (J. L. of 2015, item 1618), which entered into force on 30 October 2015, the principles were introduced guaranteeing REMIT application, including the penal provisions (Chapter 7A) for breaching the duties resulting from REMIT.

Introduction of the quality tariff

From 2016 the President of the Energy Regulatory Office introduced elements of the quality regulation to the process of determining tariffs for ODSs - operators of the distribution systems (in Enea CG the function of ODS is held by Enea Operator). They were described in detail in “QUALITY REGULATION IN 2016-2020 FOR OPERATORS OF THE DISTRIBUTION SYSTEMS (who separated their operations as of 1 July 2007)”.

It means that the President of ERO set, for each ODS, goals for 2016-2020 whose non-performance (subject to the existence of mechanisms allowing to exceed the goal within certain limits) will result in financial consequences for these enterprises.

Annual settlements of each of the ratios of the quality regulation, starting from 2016, will affect the tariff calculation, and thus ODSs’ income.

The President of ERO indicated that the ratios which have a direct impact on the regulated income of ODSs will be the following efficiency ratios:

Additionally, DST ratio - Settlement and Measuring Data Submission Time will be introduced to the quality regulation as of 2018.

Detailed rules of tariff calculation are governed by the Energy Law and relevant regulations relating to tariffs. Pursuant to the Energy Law, tariffs for a incensed energy company are approved by the President of ERO.

The rates of fees for the distribution services approved for 2016 resulted in changes in average payments for Customers in particular tariff groups in relation to 2015:

The diagram below presents the unit price for OCR depending on the volume of generation capacity available to OTSs: 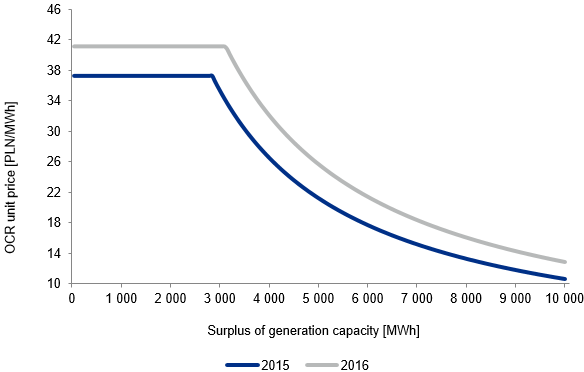 
OCR settlement rules in force in 2015 resulted in the fact that in the hours during which the OCR unit price reached the maximum level OTS did not fully use the budget designated for that service. In relation to this fact, in 2015, with an active participation of Enea Wytwarzanie, there were consultations and works which aimed at the modification of the OCR mechanism with the complementary settlement of the OCR budget unused by OTS.

The result of these works is updating, as of 1 January 2016, of the Transmission Network Traffic and Exploitation Guidance, introducing e.g. monthly and annual settlements complementing the unused, hourly OCR budget of OTSs.

Allowances for emissions of CO2

On 17 July 2015 the President of the Republic of Poland signed the act on the system of trading in allowances for greenhouse gases emissions. The act presents the principles and method of allocating CO2 emission allowances until 2020. The existing allowances are sold on the auction platform kept by EEX (European Energy Exchange), but the act established the possibility of developing a Polish auction platform. This year, Poland sold the whole pool out of 17,125,500 allowances for emissions of CO2 planned for sale in 2015. The auctions of the Polish allowances took place once two months. At least 50% of inflows from sales is to be allocated to purposes strictly defined in the act and related to the climate policy. The act foresees two exceptions from the auction system as well - derogations for energy sector and national execution measures. The act came into force on 9 September 2015.


Currently, preparations are in progress to announce a tender for the conduct of the Polish auction platform for selling allowances for greenhouse gas emissions. A Regulation relating to detailed conditions which a regulated market and an auction platform must satisfy was developed in the Ministry of Finance and submitted for signature and publication. It will enter into force within maximally two weeks after signing (vacatio legis). Another stage is the announcement by the Ministry of Finance of a tender for the Polish auction platform.

Reduction of emission of pollutants

Pursuant to the EU regulations, in particular the Directive of the European Parliament and the Council No. 2010/75/EU on industrial emissions - IED (integrated pollution prevention and control), new, stricter standards of environmental protection have been in force since 1 January 2016. In relation to the above, all producers of electricity in Poland who use mainly high-emission coal technologies, are obliged to adjust the units to new environment requirements. The law, meeting the problems of entrepreneurs, provides for a possibility of using derogatory mechanisms. Mitigation of the requirements of the IED directive in the form of derogations, allows to achieve additional time for adaptation of generating units to stricter standards of pollutant emissions into the air.