A total number of votes resulting from all the issued shares of the Issuer corresponds to the number of shares and amounts to 441,442,578 votes.

All the Company's shares are dematerialised bearer shares registered with the National Depositary for Securities.

The table below presents the structure of Enea SA's shareholding as at 31 December 2015 and as at the date of publication of this report, i.e. 21 March 2016. 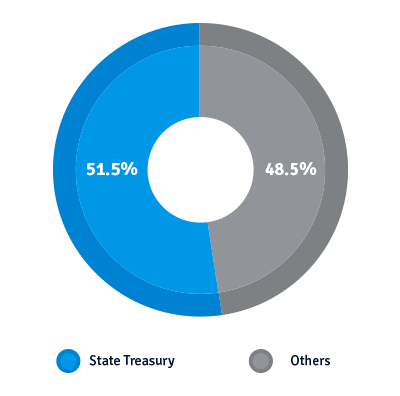 Enea SA or Enea Capital Group Companies did not purchase the Company's own shares in 2015.

Changes in the shareholding structure until the date of the statement

The Company holds no information of any changes in the significant shareholders of the Company in 2015 and until the date of adopting this report.

Potential changes in the shareholding structure

The Company does not know of any agreements or events that could result in future changes in the proportions of shares held by the existing Shareholders. However, the nature of the process of acquiring nil-paid employee shares from the State Treasury by entitled employees and their heirs may result in some changes in the number of shares held by the State Treasury.

Enea SA's Statute foresees the so called block of employee shares. All the ordinary registered shares of B series in Enea SA in the number of 41,638,955 were designated for transferring employee shares.

Pursuant to the act on commercialisation and privatisation on 16 May 2010 Enea Capital Group's employees obtained the right to acquire the Company's shares from the State Treasury free of charge. 8,818 people were authorised to the nil-paid acquisition of Enea's shares for whom 33,239,235 shares were designated.

The right to the nil-paid acquisition from the State Treasury of Enea's shares by authorised people expired on 16 May 2012. After that date agreements may be concluded only by heirs of authorised people in specific cases provided for in the aforementioned act.

Pursuant to § 6 item 3 of the Statute of Enea SA registered shares of B series belonging to the State Treasury are designated for the purposes specified in the act on commercialisation and privatisation and act on the principles of purchasing from the State Treasury of shares in the process of consolidation of energy sector companies, became bearer shares with the moment of expiry of the prohibition to sell or expiry of the right to acquire the shares free of charge.

In 2015 Enea SA did not launch any standard employee share programme control systems.